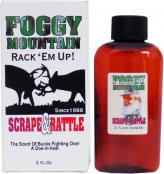 Foggy Mountain Scrape & Rattle Buck Lure is the deer hunting scent that spices up your rattlin’!

We all know rattling deer can be a very effective hunting technique. According to American Hunter Magazine: “Whitetail biologist Mick Hellickson says the results of one study revealed rattling can be very effective during the rut. In fact, there was a two to three-fold increase in response to rattling during the peak of the rut, when deer are actively breeding, over the pre-rut and post-rut.”

Now you can enhance the effectiveness of rattling with Foggy Mountain Scrape & Rattle Buck Lure by adding the scent of the dominant buck and that of a doe at the peak of her estrus cycle. After all, what are the bucks fighting about anyway? Recreate the sound and scent of dueling bucks and bring the trophy home with Foggy Mountain Scrape & Rattle Buck Lure, a powerful deer attractant.