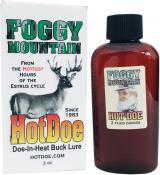 Packed in a 2 oz squeeze bottle

HotDoe doe-in-heat urine was one of the first deer hunting scent products brought to market by the late legendary Maine Master Guide Wayne A. Bosowicz of Foggy Mountain Guide Service. Wayne would settle for nothing less than the best hunting lures and HotDoe passed the test. In Maine, the big woods are heavy going. Marked by dense undergrowth, rocky ridges riddled with nooks and crannies, impassable cedar swamps – just the kind of places for a trophy buck to hide out. The big buck needs a big reason to wander out into open. HotDoe pheromone-rich doe-in-heat buck lure sends a “come hither” scent message that gives that big ol’ buck just the reason he’s been waiting for! Hot Doe is the ultimate doe-in-heat deer lure.

Last year, I had an interesting experience with your Hot-Doe lure. Veteren's Day, I walked into a deer run, sprayed a lot of scent around, and walked back into the woods 40 yards away. I knew a lot of people would be hunting the area, moving deer. I hadn't waited too long when three or four deer ran by me, but I only had brief glimpses through the brush. As luck would have it, two or three minutes later, an eight-point buck came sneaking back toward the spot where I had sprayed the lure. At the time, I was 75% sure he was returning to the lure, and 25% unsure he was confused by swirling winds. This morning, while bowhunting in the same area, I had another interesting encounter with a buck. I had made a mock buck scrape near a tree where I put my portable stand. When I walked in to the tree, I jumped a buck. Because I had been sneaking one step at a time, he must have assumed I was a buck moving in on his territory because he came back in a wide circle. I didn't get a shot, but what an exciting time. I am now convinced the buck last year was indeed zeroing on the Hot-Doe lure and not confused by wind. Right now, I doubt I would go hunting during the rut, if I didn't have a bottle of Hot-Doe lure. I'm sold on it. Ken A., Belgrade Lakes, Maine